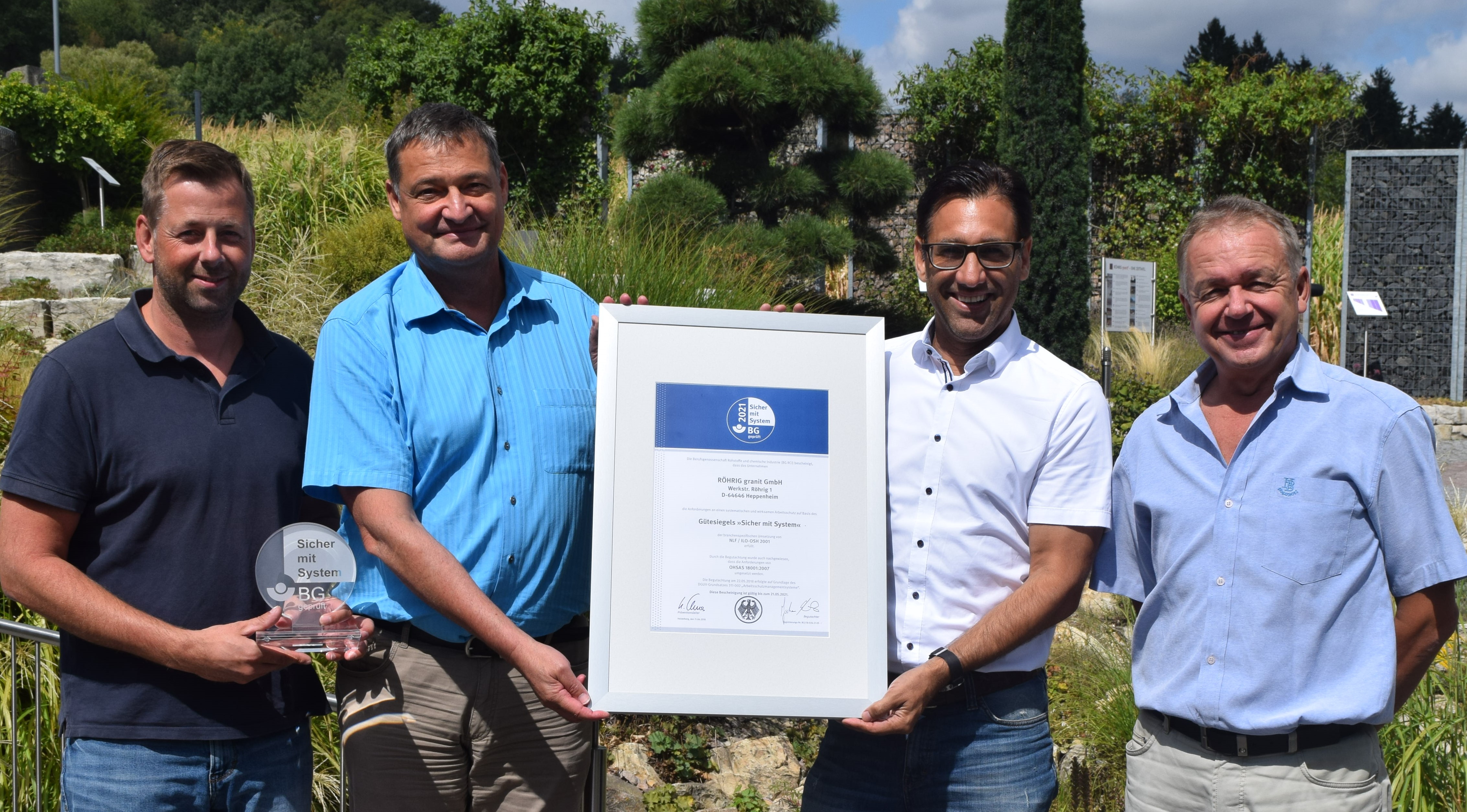 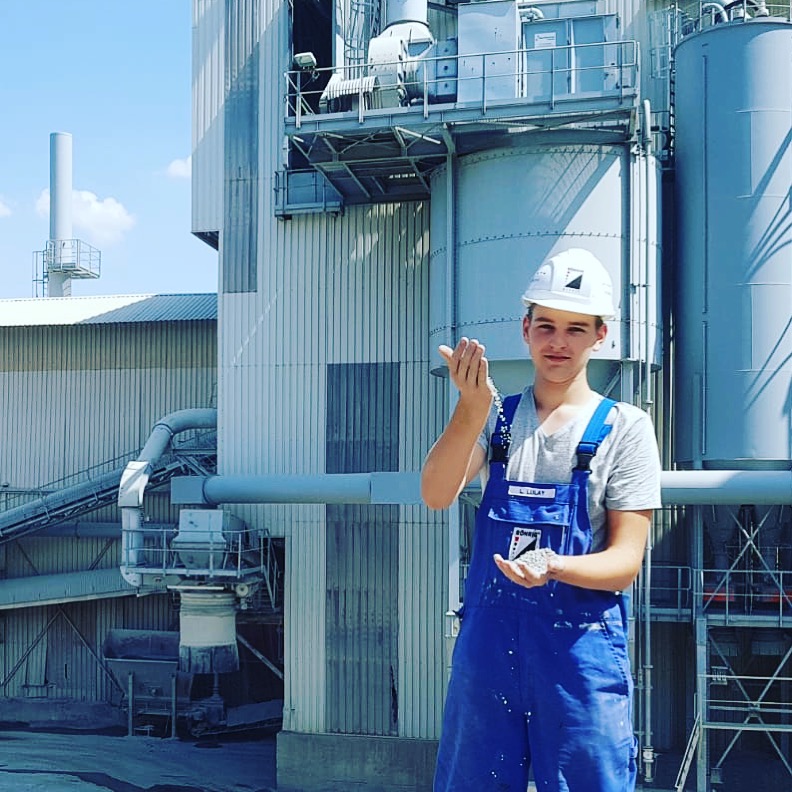 We welcome our new apprentice Lukas Lulay! Lukas started his training as a processing mechanic on August 1, 2018. We wish him a great start! 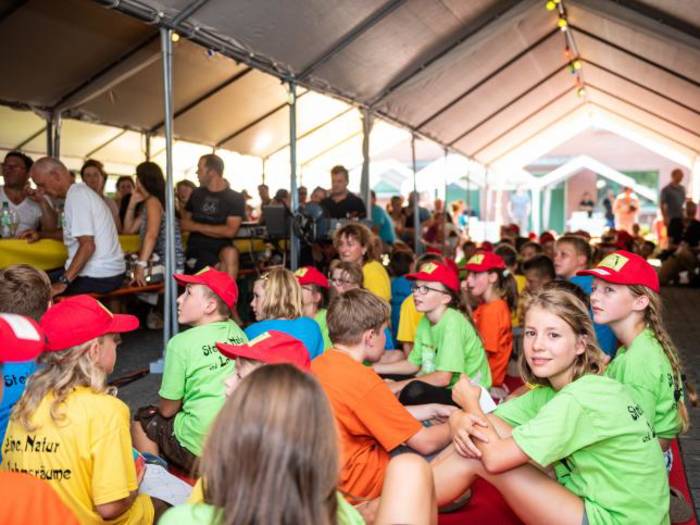 Fun and excitement in the holiday camp

Exhibits as far as the eye can see: the mile of presentation at the big farewell party of Granit Röhrig’s holiday camp is long. Parents, brothers and sisters, and guests of honor walk around in amazement, admiring what the seven- to twelve-year-olds have achieved in the past five days. Just by looking at the picture frames, beeswax candles, nesting boxes, board games and, and, and, it becomes clear: this week there was everything but a boring experience.

Movable walls with photos document what the girls and boys have experienced besides handicrafts. This is where you can see them with colorful helmets and capes in the visitor mine in Schriesheim, “where it was really cool and cold”, a boy remembers with pleasure in view of the current high temperatures.

Shooting with bow and blowpipe

Then a snapshot of children in the granite plant Röhrig in Sonderbach, where they slide and roll down a pile of gravel.

Friederike looks over her shoulder: “I am satisfied. It was often very warm, but in the forest, it was quite pleasant. I would join in again immediately – if I weren’t twelve already”, regrets the girl from Kirschhausen. “The archery was awesome”, calls a boy and explains that he has also learned to shoot with the blowpipe. “You have to take a deep breath”, he announces, and disappears.

Questionnaires lie around on the tables in the large tent behind the House of Associations. “What did you like most about your child’s stories”, it says. “Everything”, sums up one mother. “And the week with a child who came home tired, satisfied, and balanced”, adds another. There can’t be much more praise.

The younger CEO Marco Röhrig also gives praise to all those who made the camp possible – from the caregivers, mainly from our own staff, to the two patrons, First City Councillor Christine Bender and Chairwoman of the City Council Susanne Benyr, to the various cooperation partners and associations. Many VIPs came to the celebration, even Bundestag delegate and Secretary of State Dr. Michael Meister (CDU) is there. And of course, not to forget, Birgitt Bauer, who once again organized everything so wonderfully. Meanwhile, the children are not interested in the “big-headed people” at all. They sit on the red carpet, waiting for their turn. They do this surprisingly patiently and quietly. It becomes loud as Marco Röhrig, as well as his sister Jovita active as a caregiver, recalls the trips in the “party bus”.

“The week was enriching, cordial, friendly, and unique”, Bauer sums up. And for the city, it is a stroke of luck to be able to accommodate such a socially committed company, as was heard from a responsible source. The Nature Conservation Association (Nabu) is pleased to receive a donation of 2,550 euros from the participation fees. Environmental education is a top priority in and around the Sonderbach quarry. And the children have learned a lot.

Children step up to the microphone to tell stories

One by one, some children tell what they have handcrafted and tinkered on the microphone. Some do this briefly and concisely, others have meticulously taken pages and pages of notes. “First of all, good evening here”, Thomas welcomes the crowd in a cool way. Mara and Mia are putting on an advertising block for Röhrig. One of them explains in detail how iron ore was once mined at the Otzberg, and how cannonballs were made from it. And Friederike thanks the company Rettig, which fed the children for five days. “The six ladies even got up for us at 5 o’clock”, she says, impressed.

And finally, there’s a delicious warm and cold buffet for everyone: for the children, parents, grandparents, brothers and sisters, guests of honor, and caregivers. Soundman Dirk entertains with music. And the parents of the children, who answered the question “What was it like?” with a detailed “Good!” every day, learn a little more about what was going on in the camp.

Eighty-five children had a lot of fun in the Röhrig Granit holiday camp for five days from early morning to late afternoon. There were well over 100 applications. Those who were unable to attend received a voucher, and can now join a day workshop in autumn. And maybe they will be back at the next camp, which will take place in 2020. (rid)