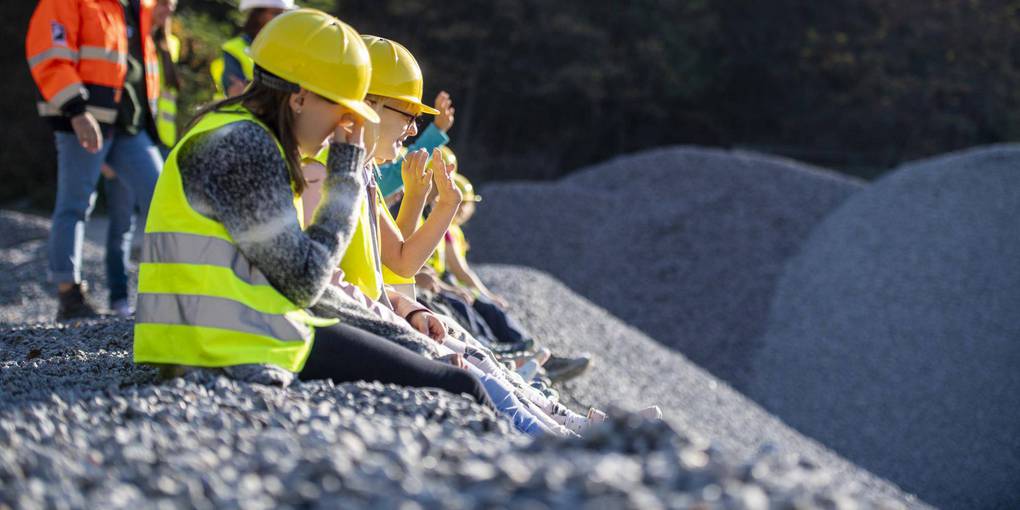 Going on an excursion right after the holidays – that was to the taste of the girls and boys of class 2a of the Eichendorff School in Kirschhausen. In fine weather, the group, together with teacher Angelika Klammt and social pedagogue Ramona Maas, hiked to the quarry of the Röhrig family in Sonderbach – a teaching excursion that is part of the school’s standard program.

Birgitt Bauer was already waiting for the class, then the children were first dressed: each of the children was fitted out with a bright yellow warning vest and a helmet, and finally, they entered the quarry adventure. Past gigantic machines and vehicles, which caused the children to marvel, it went uphill.

The primary school children were also impressed by the steep walls of the quarry: “Whoa, that’s high”, they were impressed. Bauer wanted to know how old the granite was. The fingers rocketed high: “Ten years”, “50”, “20,000 years”, the children estimated. As much as the girls and boys thought about it, they were wrong. The granite was 320 to 340 billion years old – and thus older than the dinosaurs, Bauer said. She explained that the granite was formed after a volcanic eruption, and that it was almost as hard as a diamond. Sarah remembered that she had studied a stone in class that crumbled easily – that was not granite, but a sandstone, which also exists in the region. We walked to a huge pile of split. There, the joy was great when the children learned that they could now slide to their heart’s content. They didn’t have to be told twice. And after everyone had emptied their shoes for the umpteenth time, they were taken off without further ado, and all continued on stockings. “Hey, that tickles”, the children said. Grit instead of a ball pit. “Just pretty dusty”, a girl ranted. Eight-year-old Dziuga even performed a cartwheel down the grit hill, and Jonna (8) thought it was a good idea “that we all took off our shoes”. Finally, the entire group was allowed to take a seat in a huge excavator shovel – the entire class fitted in easily.

Afterwards, we went into the stone crusher, which also gets huge granite chunks small. If the blasted-off pieces are too big for the crusher, they are smashed while still in the quarry with an – at the beginning of the year – about seven metric tons heavy iron ball. Over the months, this ball wears off more and more, weighing only half at the end of the year.

Young eagle owls make themselves comfortable on the machines

Nature and the environment are the issues at the “environmental school” in Kirschhausen. And there are the visits to the quarry, to a piece of Earth’s history in which many rare animal species live such as the eagle owl, the yellow-bellied toad, and the smooth snake.

The girls and boys were fascinated as Bauer told them that they would discover a young eagle owl every once in a while on one of the machines in the morning. According to Bauer, the animals have adapted to the work and the explosions, and feel comfortable. Otherwise, they would not breed there year after year.

Twelve-year-old Jette is curious. Will the biotope that she has just built with the other children really become a habitat for common wall and sand lizards next spring? She definitely wants to come back and see for herself. Paul is enthusiastic about playing and working in the nature. “Always this work”, jokes ten-year-old Jule, who is taking a short break with Marie. The others are picking up apples.

The steeply sloping terrain on Sonderbach’s Werkstraße, which Röhrig Granit has bought, is around 600 square meters in size. The quarry is not being extended here. Together with Nabu, the company once again wants to set an example in terms of nature conservation and sustainability. On Tuesday, industrious helpers between the ages of seven and twelve are busy turning the large meadow into a paradise for animals and plants. It’s workshop time again for children.

Elaborate chaos of stones and branches

There were more than 180 registrations in the summer for the one-week holiday experience, but only 85 children can participate due to lack of space. Those who didn’t get a chance had the opportunity to spend two exciting and instructive days on nature and nature conservation during the autumn school holidays. A total of 33 girls and boys from the district were enthusiastically participating. They were looked after by Günther Hagemeister of the Nature Conservation Association (Nabu) of Heppenheim, and the experienced Röhrig team, consisting of Birgitt Bauer, Marco Röhrig, Jovita Röhrig, Mario Helfert, Rüdiger Hamann, and Nicole Schroeter.

There, they first had to schlepp stones and small trunks: not far from the bee colony and the richly bearing apple trees, a habitat for all kinds of small animals was created. What at first glance looks like a pile of stones and branches thrown together is built with a lot of know-how. Because if you do something wrong, the lizards do not accept the construction, and stay away. Heat islands were created, a substructure of sand and rock gravel for laying eggs, grass sods for frost-free wintering. On wood, the nimble, change-warm little animals are better camouflaged. On the outside, plants are seeded to provide food for butterflies. During his foray across the large meadow, Hagemeister was quite surprised to see the rare dusky large blue fluttering there. They are usually found where there are marsh meadows. The small butterfly is characterized by the fact that it lays its eggs in the buds of the burnet; the larvae fall to the ground, are carried by ants into their den, where they feed on the ant brood.

The children planted four trees together to start a meadow for orchards: pear, apple, cherry, and quince trees. More will follow in November. There are fewer and fewer orchards, Hagemeister explained.

In the afternoon, the children pressed their own juice from the apples they had harvested themselves. Even more “wild corners” are to be created over the next few months. In September, a delegation from the Hessian Ministry of the Environment examined the terrain, found it suitable, and praised the joint commitment of Nabu and the company.

Günther Hagemeister explains that the Röhrig quarry plays a pioneering role for the whole of Germany in terms of protecting an active quarry as an FFH area – a flora-fauna habitat – and in terms of reconciling mining and nature conservation. Whether eagle owl or yellow-bellied toad, for which the children have created three pools, protected animal species prove that it works. In the meantime, some quarry operators have followed suit. They have now also realized that nature conservationists are not enemies – and vice versa. Hagemeister himself finds the view into the history of the Earth that such a quarry provides extremely exciting. (rid)

On Tuesday morning, after having had breakfast together, we started to create things, including nesting boxes, which were later hung up. Then, we went into the terrain.